The Entrance to the Underworld

Nasa says: "This large dune is found on the floor of an unnamed crater in Terra Sabaea."

I have now rotated the image to align with the shadows. 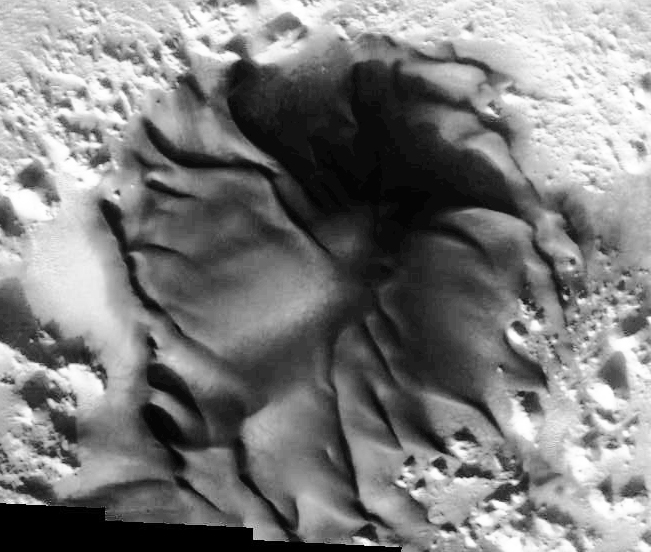 Its hard to call this area dunes when it looks more like Jabba's death pit in Star Wars.

Anyone familiar with NASA's Martian dune images is aware they can be strange, very strange, but this gigantic dune looks like it might actually be a cave descending

into the Martian depths. This remarkable feature is surrounded by similiarly remarkable details.

Here is a closeup of the circular "ramp" descending downward into the "dune."

Below is a larger look at the landscape above the dunes.

To the right of the "dunes."

Get your bearings. Pay attention to the shadows on the terrain to gather the depth of the scene.

Here is a detail of the geometric area in the far right of the image above.

And yes, those shadows in the picture do appear to belong to pyramidal structures.

There are pyramidal forms all over this strange region of Mars.

The Mayan culture of Earth called the entrance to the underword, Xibalba (its pronounced: sibulba), and may have even created an underworld to portray their visions.

Could the "dunes" in this region once have been a place of worship and memorial for an ancient Martian civilization?

Are these two ancient decaying Martian sphinxes carved out of the rock? The two faces appear in the top left.

Compare to the Great Sphinx of Giza.

Here is another look at the region filled with what appear to be decaying pyramids.

An interesting anomaly in the "ruins."

It appears it could be a huge lander of some sort. The circular portion could have once had massive landing arms.

Now it is just a miniscule artifact on the surface of an alien planet.

In another area of the main image, a disc form takes shape below the debris and dirt of unknown generations.

An interesting curve in the rock turns out to have bigger proportions.

Here is a larger shot of the area.

Here is the same area equalized.

Do you see an oval shape buried beneath the debris?

Another anomaly, to the bottom left of the "dunes:"

Here are two more structures jutting out of the clouded ruins.

Perhaps these protrusions are due to volcanic activity. Does the cooling of lava often result in very similar structures in close proximity?

Here is another image that seems to show something anomalous.

Focus on the largest dark area of the image.

There appears to be something in the shadows.

Left: Ancient machinery in a cave or just rocks?

Right: Similar machinery at the top lip of the dunes next to the ramp or just rocks?