Roadways, networks of connections between one place and another, have been a significant factor in advancing civilization on Earth.

The earliest roads on Earth predate recorded history by thousands of years.

It could be argued that all advanced planetbound civilizations must utilize roads in some manner.

Here is an area on Mars that seems to indicate a network of organized connections. It is taken from a NASA image that is 3.22, or 2 miles, wide.

This area represents approximately a 1 mile wide closeup from the region. 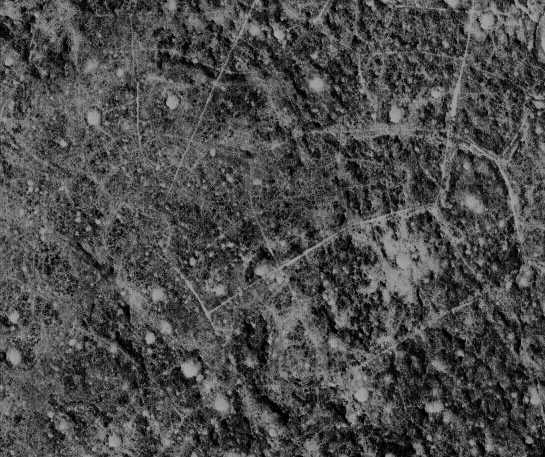 The area above comes from a NASA image they say is mostly represented by dust devils.

What is a Dust Devil?

Left: Martian Dramatization of a dust devil / Right: A dust devil on Earth

Dr. Ken Edgett, a staff scientist at Malin Space Science Systems in San Diego, Calif. says: "Most of the time these (dust devil) tracks are darker than the surroundings,

but sometimes they are lighter---it just depends upon whether the surface under the thin coating of dust is brighter or darker than the dust itself.

In some places on Mars, you can get hundreds of crisscrossing dust devil tracks, they make a pattern that some say resembles Jackson Pollack paintings,

others say resembles something their 2-year old might do with crayons." Link to article: http://www.jpl.nasa.gov/news/features-print.cfm?feature=519

Below are two official NASA images of dark and light martian dust devils.

Let's compare our Martian image from above to a modern satellite image of a city on Earth.

Do the straight lines and hard angles on Mars look like the result of dust devils?

Here is the Martian image in Photoshop inverted and filtered neon glow.

On the other hand, the area shown below from the bottom of the original NASA image looks exactly like Martian Dust Devils.

Which image above looks correct to you? The original (left) or inverted version?

Here is the top of the original NASA Mars image - inverted. Look at the lines. Do they look natural or artificial?

Please visit the link above for the official (uninverted) image.

Now that you have seen the original unedited NASA version ask yourself two things:

First) If you decide that the official NASA image indicates that the "roads" are actually cracks in the Martian surface, check out this JPL/NASA satellite image

of Los Angeles. Original Caption Released with Image: "This is a radar image of Los Angeles, California, taken on October 2, 1994. Visible in the image are

Long Beach Harbor at the bottom right (south corner of the image), Los Angeles International Airport at the bottom center, with Santa Monica just to the left of it and

the Hollywood Hills to the left of Santa Monica. Also visible in the image are the freeway systems of Los Angeles,

which appear as dark lines."

Here is a comparison of the above Los Angeles image (the black lines are freeways) with an unmanipulated (not inverted) closeup of the original JPL/NASA image.

The LA image is 32 miles across. The Mars image only 1 mile.

Here is the same image comparison with heavier contrast in the Mars image.

Would you agree that either image could arguably represent cracks or roads just on their visual merits?

Knowing that the image on the left is Los Angeles, we are not surprised to see many right angles and straight lines.

But in the Martian image should we expect such a degree of organized geometry from dust devils or surface cracks?

The images of Earth and Mars presented here have a common theme. They both host many areas boasting impressive 90 degree angles.

The Beijing image (which is far more similiar in scale to Mars) depicts similiar "intersections."

Look at another detail of the original Martian image. Some areas look very much like freeways with off-ramps linking different parts of the "buried metropolis."

The lines do not look random, as the dust devil examples appear to be.

These lines seem measured and determined, as if there is intelligence involved.

First) If these are dust devils, which is more likely: The sand was blown across the Martian landscape forming incredible straight lines and

map-like grids; or the sand, over time, was blown across the landscape and filled geometric channels and canals that were already there?

Perhaps in this conjecture, it doesn't really matter if the sand is dark colored or light...

Second) If this incredible cityscape pattern is actually cracks in the Martian surface, why are they spaced so efficiently, why are the angles so crisp, and why are there multiple

geometric patterns rather than the more uniform patterns associated with surface cracks we usually see on Mars? Example: Link to Martian Mud Puddle

Ask yourself, where on Earth can you find both awesome right angles intersecting with numerous other right angles, while also seeing the sweet fluidity of curves?

Here is a beautifully curvy "Martian road" among all the hard lines.

This closeup image seems to show a plethora of intelligence; geometry (relationships of points, lines, and angles) and fluidity (smooth and flowing, graceful).

Notice at the bottom of the picture, even though there is still a vast amount of sand, it does not have any of the design as the image demonstrates at the top.